So, now that I'm making a conscious effort to eschew as many processed foods as possible, I can honestly say that I feel really good about it, and it's not that difficult.  With the help of Bountiful Baskets, it's so much easier to eat well and at a reasonable cost.  Being an ovo-lacto-pescatarian has helped tremendously.  With the lack of meat and processed foods, my grocery bill has plummeted.  Everything I need, I can make.  Chocolate chip cookies?  Check.  Banana bread?  Check. Pie crust?  Check.  If I can't make it, I probably don't need it.  Of course there are exceptions; pasta, some canned beans and vegetables...probably quite a few things, but nonetheless, it's helped my pocketbook AND my waistline.

The container garden is going great guns.  I've got beets, mint, cilantro, strawberries, peppers, tomatoes, cantaloupe and watermelon, not to mention a bucket of zinnias which I hope will flower, as they'll make a pretty addition to the house. 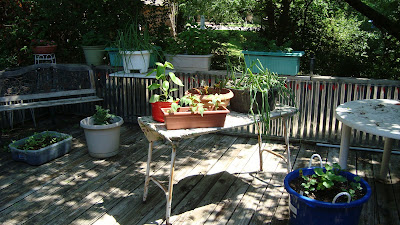 On the food front, a couple of ideas.  A frittata is possibly the world's most versatile meal.  If you've never had one, they're ridiculously simple to make, good for you and a great way to use up leftover stuff hanging around in the fridge.  It's basically a big non-folded omelet.  One of my favorites is caramelized onion, goat cheese and sage, but yesterday I knocked up a potato and leek version.  As you're dealing with eggs, you'll need a big, ovenproof, nonstick skillet.  I sliced up a couple of small potatoes and sauteed them in a little oil in the skillet until they were tender.  I actually was being impatient, so what I usually do when that happens is add a little water to the pan, cover it, and that speeds up the cooking process.  Remember to season every step.  When the tats were soft, I poured in a mixture of a couple of whole eggs, some egg whites, and some leftover egg substitute I had hanging around in the back of the fridge.  You'll need enough of that mixture to cover the tats.  Also into the egg I put a good handful of Parmesan cheese and some sliced and sauteed leeks.  Mix it up and pour it over the tats.  Let it sit on the stovetop over medium low heat just until it begins to set.  I forgot to mention that you should have preheated your oven to 325°.  Slap the whole thing in the oven and let it go for 15-20 minutes, or until it's set in the middle.  Take it out, let it sit for 5 minutes, slice and serve. 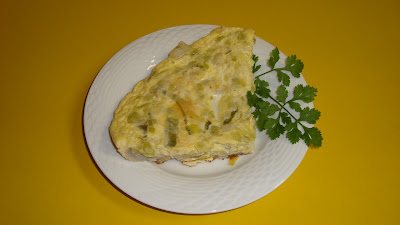 Here's my idea for leftover salad:  Vacuum seal it.  Yes, you read that correctly.  I seal my leftover salad in large Mason jars and it will stay in the fridge WAY longer than usual.  Then, you have a salad ready to go whenever you feel like it.  Pop the top, add some dressing if you want, screw the lid back on and give it a shake, and you're good to go.  No excuse ever to not have salad! 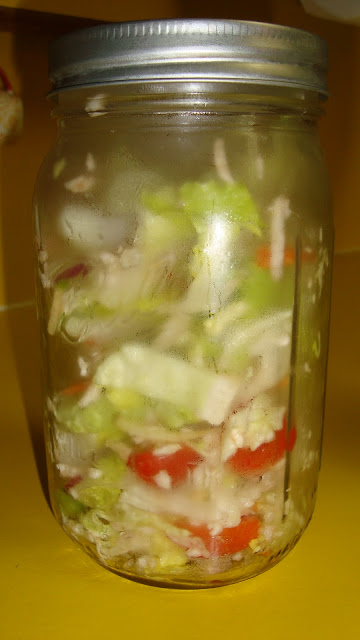 On the crafty front, I wanted to show you my easy window treatments.  Stupidly easy.  Take cloth napkins.  Line them up so they're overlapping (see the photo).  Fold them over. Stitch a line about an inch down from the fold. Run curtain rod through.  That's it.   Colorful, easy to change out, cheap.  I sewed large buttons on for contrast, and the hanging thingys are art-glass pieces from a studio shop in Lafayette Indiana.

Yes, you can make this stuff!! 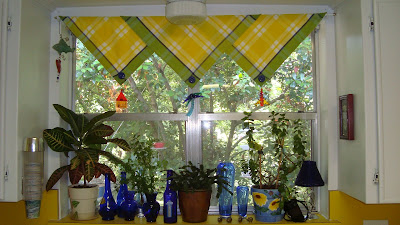